Follow your children's relocations remotely and get informed immediately once they come to the areas you disapprove. Be always aware of your child's exact whereabouts with mSpy. 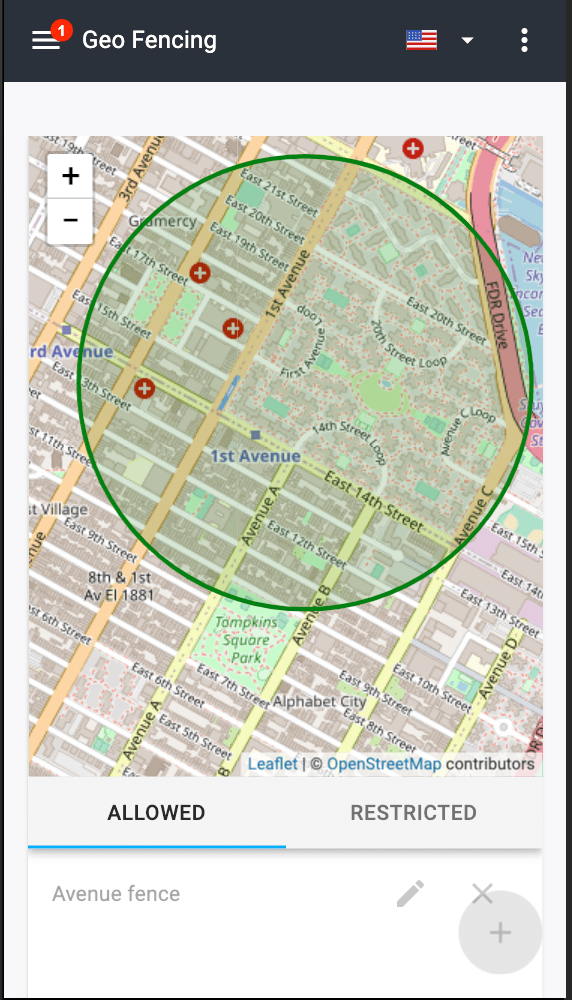 WITH MSPY YOU CAN: 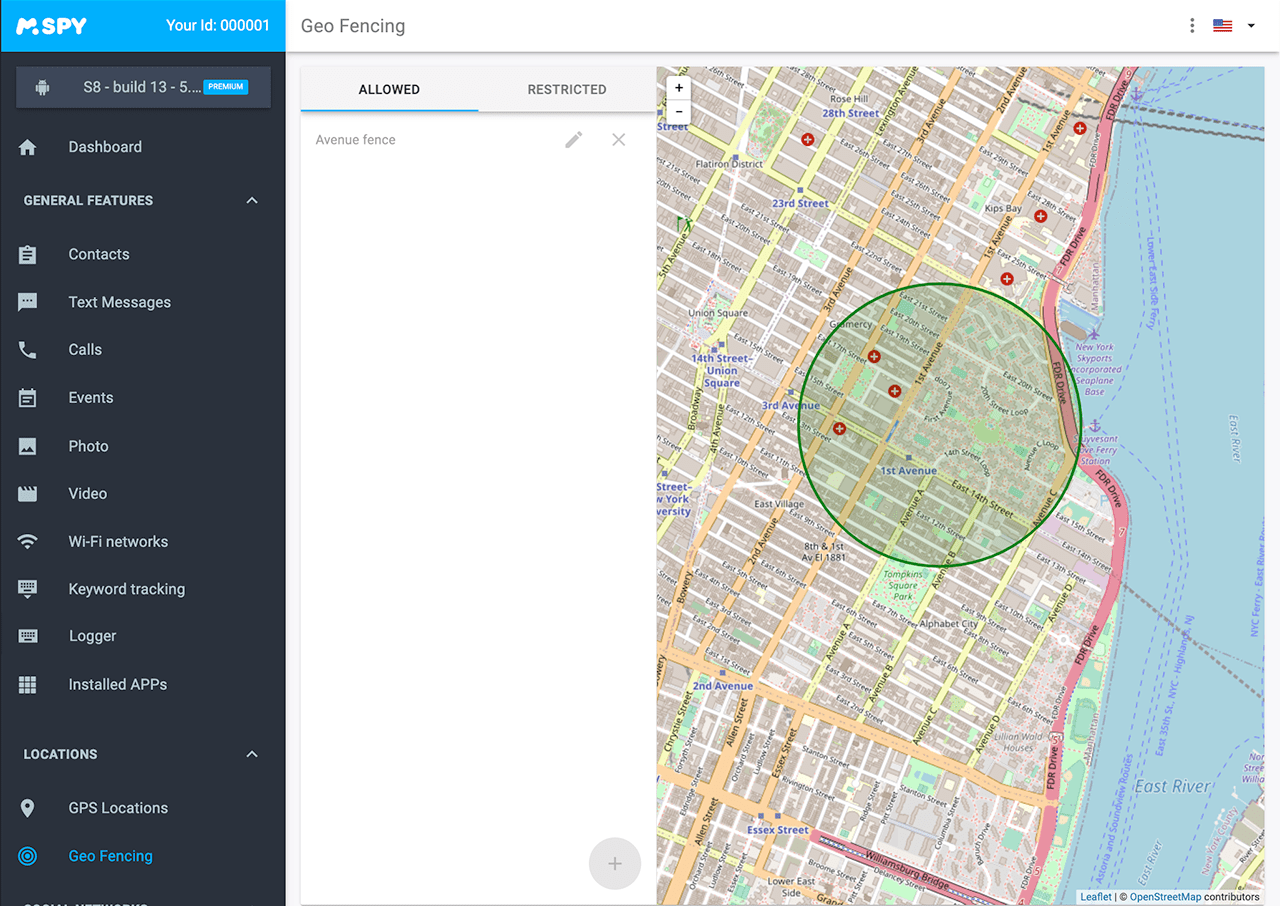 compatible with:
Available in:
Why will you find this feature useful?

Child safety is the highest priority of multiple world organizations. And they call for creating a safe online and offline environment for kids. But the lion's share of the responsibility for the child safety rests on the shoulders of parents - they are the primary force to prevent and protect children on the place.

Abductions, kidnapping, physical contacts with child abusers - all of that is a common case when parents do not supervise children. Be always informed where exactly your child is with the mSpy geofencing app!

Tendency: a child is abducted every 9.9 days in Avon and Somerset; in Surrey - every 21.5 days.

How does mSpy work?
Buy mSpy

Pick the most convenient package and subscription plan. After making a payment, open your email box and find a welcome letter from mSpy. Follow the link to the Control Panel.

Install and Set Up

Download and install the application on the child's device by implementing the setup instructions from the Control Panel. For troubleshooting, feel free to contact the Customer Support Service available 24/7.

Access the mSpy account with a login and password provided in the welcome letter. On the Control Panel, find the number of features to view. Click Geo Fencing and start setting up virtual boundaries.

I joined mSpy after the social experiment with Coby Person, and it fits the bill. It definitely the must-have tool for all parents.

To me, the Internet is a gateway for abusers to commit different offenses against kids. My children are very small to confront the harsh reality, that's why I use mSpy as it helps me to keep them safe.

I am a single parent and having a tool like mSpy is very handy as I can always check where my kid is even if I work long hours.

I don't want to be a helicopter parent, but the bloody world of Social Media is perilous to stay indifferent. I use mSpy to restore peace of mind and to keep my kids safe.

Prevention is better than cure, it is a key point why I choose mSpy.

mSpy team explains what is geofencing

If you're a newbie in technology and have no idea how geo-fencing works particularly for your household, let mSpy make the topic clear. Moreover, you'll find out where geo fencing comes from.

Geo fencing (another variant geo-fencing) is the process of setting virtual borders that are prototypes to real geographic zones. Usually, it is shown as a radius around a spot. The feature allows predefining some boundaries and puts their indications on the virtual map.

Geo-fencing implies the use of the location-oriented device or service like mSpy. The application contains an inbuilt geo tracking system with the geo-fencing option. Altogether it provides a clear and accurate picture of the child's movements. Moreover, it triggers an alert to the app's user and sends a notification. mSpy delivers the notification to an email account. The geo fencing restriction means a parent sets up boundaries and that way restricts a child in their movements. In a nutshell, using mSpy as the GPS tracker with the geo fence option is solid assistance for parents. Let's have a look at the origin of geo-fencing (in case you have no clue where it comes from at all).

The GPS conception was at the origin of geofencing. The global positioning system was first used by the American Navy. It had to track the distance from the satellite to the Earth. This system had been used for 35 years until it was integrated into the cell phone. Cell phones would function the same way - pinging satellites and calculating locations. By the Millennium, the system was significantly improved in terms of accuracy - from now on, it would provide 24-hour updates. This allowed companies to regard the opportunity of building GPS features into cars and mobile phones.

In the early 2000s, geofencing apps were not super accurate. The location data was coming from a zip code, IP addresses, and other sources. Due to this fact, geofences had to be broader and comprise bigger zones not to escape the possible traffic.

The game-changer was an independent GPS. In the second decades, Android devices were becoming more intelligent. They started to contain their own global positioning systems. There was no need of towers or ISP. The battery drain was no longer a problem.

When Android devices and apps began to implement geofencing, it changed the nature of the latter. It combined with other emerging technologies providing customers with the most powerful tools.

If tackling the question of the price, the cost obviously differs. When looking for a sole geofencing app, the function might be more expensive than a full-fledged software as mSpy is. For parents, it may be less beneficial in the regard of the whole monitoring. It's not enough to know when a child is; it's way better to know online chatting, online activity, apps use, calls and text messages, etc. Altogether, the feature is more contributive to prominent parenting. Some write that in-app geofencing is expensive and is measured in the four-digit number. With mSpy, it's never the case. Otherwise, customers can pick an ideal subscription and spend no more than $9.99 per month. Breaking bank accounts was never the mSpy's intention, but affordable care in the realities of online risks.

Kidnapping or any sort of abduction is a common practice worldwide. In the United Kingdom, there's a terrifying tendency of child abduction increase. For example, in Avon and Somerset, a kid is kidnapped every 9.9 days; in Surrey, kids go missing every 21.5 days. There are different forms of child abduction. But they all have something in common, which mSpy is trying to deal with, - the location-related problem. Parents or guardians have no idea where their kids are at some particular moment.

Child abduction can be produced by a parent who takes their child out of the country for 28 days. But such cases are few. Child groomers can be accused of abduction if they lured kids into a meeting in person.

Experts say that teaching kids to avoid strangers doesn't work. This is why caregivers should turn to geofencing apps. They will help check on kids remotely and keep the peace of mind all the time when parents are obliged to work distantly, take night shifts or extra hours to provide to their family.

Another side of geofencing is its provision of data that might be used for data analysis. Realizing where a target person has been and how often (sort of frequents) is crucial when concluding some regularities. With geofences, a parent can get to know when a child enters or leaves a designated location, for example, the mate's party, so they can comprehend their interests and tailor the parental educational style to them.

When examining the monitoring market, parents will find lots of options offering geofencing restriction for Android devices. Meanwhile, the geofencing feature expands intensively the capacities of the devices themselves.

It's worthwhile to mention that some companies use geo-fencing to track whether the employees are within a range of a job site. Since monitoring in the business sphere is allowed by the law, lots of employers opt to view how workers use their work time and the stuff of the company. However, it's the owners and execs' responsibility to inform about the fact of monitoring beforehand. According to some surveys, employees do not mind being tracked with geo-fencing and have a positive experience with it. This feature in combination with alerts reminds simply them about clocking in and out at work.

Parents probably would never suggest that geofencing increases the technical capacities of devices and make them effective in parenting.

Applications like mSpy with tracking features such as geofencing and GPS location recording meet the need of particular households. For example, children with deviant behavior, who's overactive and manifest aggression, need strict supervision. Meantime, you cannot isolate them from the entire society for them to keep resocializing when being corrected.

These peculiarities oblige parents to check on children remotely. Another angle where geofencing may come in handy is households with teens going through the wilderness therapy or after it.

Nowadays, teenagers might have different types of addiction. The latter requires the medical intervention as well as corrective regulation. It is provided by recovery centers and camps where children learn to live without addiction triggers. After passing them, children need to be supervised to make sure the therapies worked. This is where geo-fencing is useful. It adds an extra value to parents' device.

Let's take the example of a hyperactive child. The thing is you're never sure where they are willing to go and who to interact with. When parents set virtual borders, they know the area of children's safety. So, they keep working checking from time to time where their son or daughter is. When children leave a safe zone, parents get an alert immediately into an email. Usually, even not tech-savvy parents synchronize their emails flow with Android alert system. That way, they know what kind of email has arrived and whether they should react. In other words, the combination of mSpy geo-fencing and Android synchronization creates a coherent alert system for parents with particular children in the house.

Finishing with the subject of geo-fencing and its benefits, let's remind that mSpy contains about 30 monitoring features. It's the Premium package where all of them are available. You can always give it a try and decide whether it's a perfect finding for your family and a child. Considering the facts, stats, cases that literally haunt parents, using such application is no brainer.

Note that before purchasing mSpy, make sure the target device complies with the required version of the Android operating system.

When using the app, make sure the target device is connected to the Internet to get timely updates to the Control Panel.